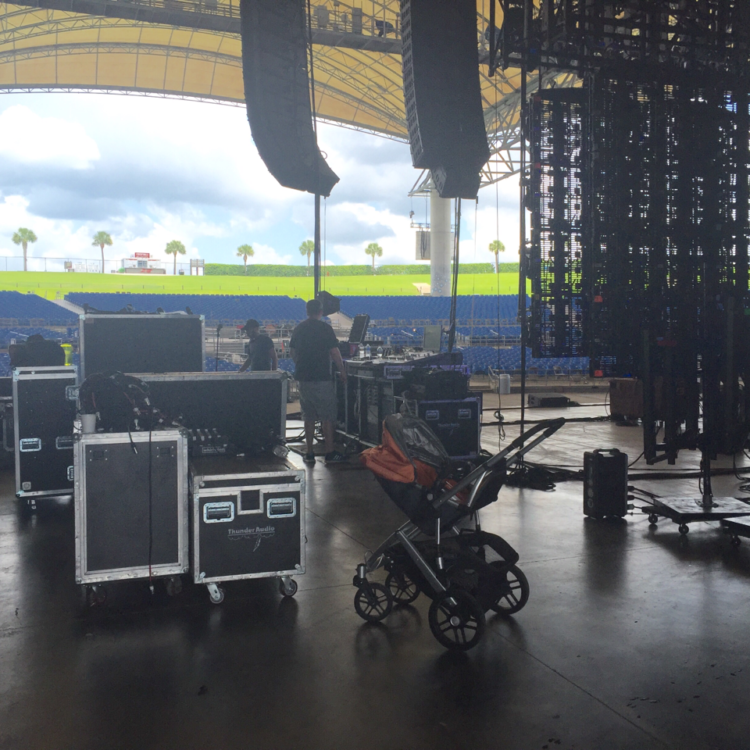 Andrea Lacey is back, sharing life on the road, currently on tour with her husband’s band, Brand New and Modest Mouse. She is traveling with 60+ other people, making note of cool places she finds, tips for traveling with a baby, etc…
“Since I checked in last, we’ve made quite a few stops, including Chicago, Detroit, Pittsburgh (home of Mr. Rogers), Cary, Miami, Tampa, and Atlanta. The first week was tough, with unpacking and last minute, on-the-road shopping, but it feels like we’ve now found our rhythm. Some of the recent cities in the south have been absurdly hot, keeping us from venturing too far from “home”, so I thought I’d write about how I keep Bowie entertained (and cool) in a bus/backstage environment. Lastly I’ll mention a few spots we found along the way that we enjoyed.” – Andrea 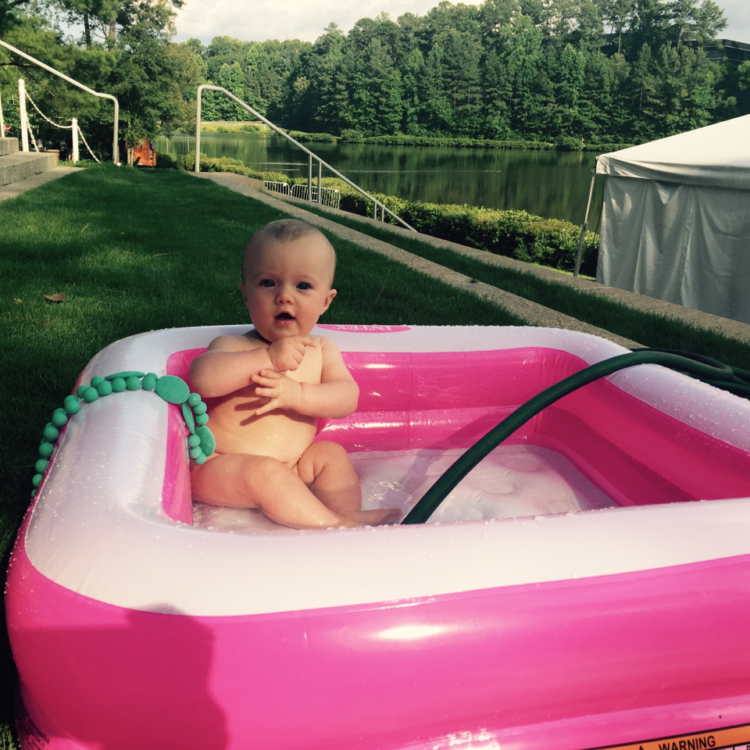 If you’re a mom, you know there are always a lot of people telling you how to mother, so I just want to make a quick disclaimer: I’m in no way a mothering expert.  I’m just trying my best. So, please let’s not pass judgement or make comments on what people may be doing right or wrong and instead focus on supporting and learning from each other. I think the world could do with a little more love these days.
With that being said, here’s our run of day…
A typical day on tour both starts and ends a little later than the “normal” work day. Bowie really likes the gentle rock of the bus, and has luckily been sleeping like a champ, so she will usually get us up between 9 and 10am. By that time we’ve usually arrived at whatever venue the band plays that day.
I like to get her out into some fresh air as soon as possible, so we’ll take a morning stroll, which will usually have a bit of a different view than your standard neighborhood walk.

It’s a pretty large crew on this tour, so it’s fun getting to check in with everyone and say good morning, and let them get their morning dose of baby.

Usually we’ll have about four hours to kill before my husband starts work, and if we are not venturing in to the city or away from the show, we try to create some home-like environment for ourselves where we are. I brought a couple of small outdoor rugs from Ikea. They’re a dream if you have kids and/or animals at home because you can just hose any kind of mess right off of them. We put those down with her pool and jumper and create a little play space outside. I also have a pop up half-tent thing, which works great for making some easy shade when the sun gets too brutal. While in Cary, NC we had a great setup with some lawn space right on a lake. Bowie was able to swim, keep cool, and check out some cute baby ducks.
If the heat really is too much though, or I’m worried about her getting too much sun, I bring her in the bus or backstage area. She recently started enjoying scooting around in her walker, and it’s just nice to have a safe place for her while we eat, talk, or if we just need to give our arms a break from holding her.
Bowie will usually take a pretty long afternoon nap and we have a great baby monitor that actually lets me walk about ten whole paces away from the bus. What freedom!
Lately, she’s been waking up from her late nap in time for showtime, so we’ll watch a bit of the bands play. The lights mesmerize her, and she just likes watching everyone dance and sing.  She is ready for sleep well before it’s over, so we’ll head to bed, and try to sneak in a shower before we hit the hay. I am really missing bath tubs these days.
Atlanta:
My favorite place we visited this week was Atlanta! The bands played Chastain Park Ampitheater which was in a stunning neighborhood. The neighborhood was wooded and hilly, which is something I’m a huge fan of. There was a trail nearby – actually, THE TRAIL, which, according to my friend who is local, winds throughout the entire city. But, the best thing we found was a  lovely community pool that cost only 4 dollars to swim in. It was huge and parts of it were covered, offering good amounts of shade for your kiddos.
*The photo of the pool above was found here.
Also, I noticed that the park contained stables and a horse event center. We love horses! So all in all that day was a win.
Pittsburg:
We also had a great time in Pittsburgh. We found ourselves in the Strip District where we found great coffee (21st St.), terrific vegetarian food (Kaya), and ( Peace, Love and Little Donuts), which were amazing.

It’s time to head out for the day, so I’ll check in again soon.
-Andrea x 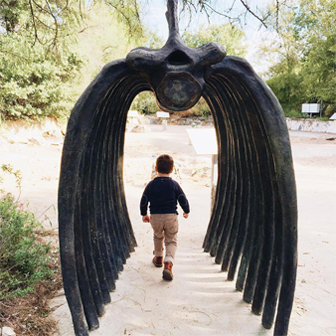